A delegation from Manchester City Council, the University of Manchester and e-forum visited Tianjin in China on 09.12.2016 to develop their role as an observer city in Triangulum.

Mark Duncan, James Evans, Shaun Topham and Paul Stewart were hosted by the Tianjin Foreign Affairs Office at the Tianjin Urban Planning Exhibition Hall. In addition to looking at some of the city’s smart developments including Binhai and the new eco-city, plans were made to share Triangulum outputs with key partners in the city. 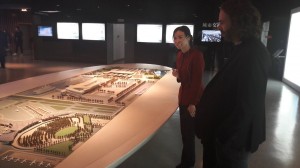 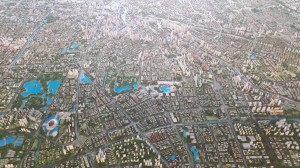 During the past months, the follower city of Leipzig has made an effort to bring the Smart City topic closer to the inhabitants of the focus district in Leipzig-West and, at the same time, to contribute to a city wide strategy.

During September and October 2016, a series of four thematic evening events took place. Each workshop was dedicated to a Smart City related topic: Smart Energy, Smart Mobility, Smart District and Active Neighbourhood Society. After an input speech by a member of the local Triangulum team on Smart Cities and on first ideas on a “smart” district in Leipzig West, the participants discussed visions and obstacles for the further smart development of the district as well as their own project ideas. The results of the evenings will contribute to the Smart City implementation plan to be developed within the Triangulum project activities in Leipzig. 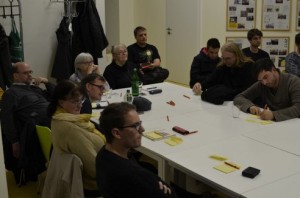 Additionally, a new website was launched to explain and document the Smart City process in Leipzig-West. It will constantly be updated and new information on events on Smart City topics will be published.

The local Triangulum team also works closely with other partners to engage inhabitants in Smart City topics. Together with the Institute of Urban Development and Construction Management of Leipzig University, the evening lecture series “HOT SPOTS :: DER STADTENTWICKLUNG” is organised during the winter semester, focusing on Smart City related topics. In the first lecture, Steffen Braun of Fraunhofer IAO in Stuttgart presented the Living LaB Ludwigsburg. In November 2016, Ulrich Hörning, Deputy Mayor of the Department of General Services of the City of Leipzig, presented his ideas for a “smart” city.

On 22.11.2016 the expert discussion “Leipzig is growing sustainably – the digital city” took place as part of the update process for Leipzig’s integrated urban development strategy. Around 50 participants with different backgrounds (civil society, science, economy, city administration and other municipalities) discussed the opportunities and challenges of a “Digital City”. 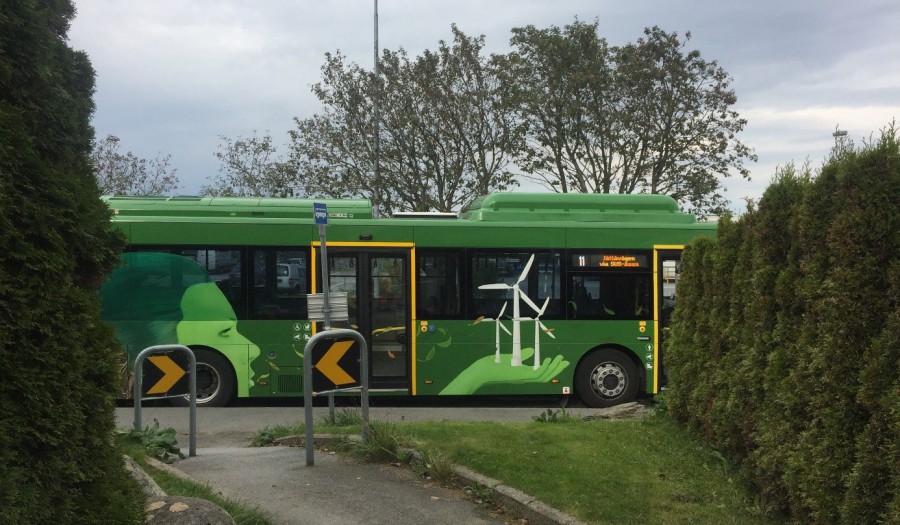 One of the Triangulum activities in Stavanger is the purchase of new battery-powered buses. This purchase offers a great possibility for the inhabitants of Stavanger: to have a say in the design of the buses themselves! 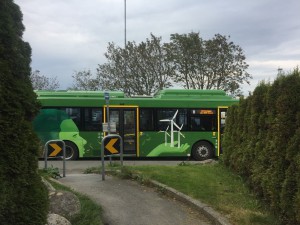 Between February and April 2016, the students could submit their own designs to the competition. School classes could deliver as many design proposals as they wanted. A jury selected a design from each school before a separate ballot decided on the winning design.

The local newspaper was involved, presenting the designs to the public to vote for their favourite design. It was a great success with thousands casting their vote.

This activity created a lot of publicity for the Triangulum project. The school class with the winning design received a prize of 20,000 NOK. The three battery-powered buses in the new design will arrive in Stavanger in January 2017.

Learn more about the local Triangulum activities in Stavanger in three videos: One video shows the kick-off event of the bus design competition, another one explains Stavanger University’s role in the Triangulum project. The third video focuses on the project activities of Triangulum partner Lyse.

The Smart City Expo World Congress (SCEWC) in Barcelona is the international smart cities discussion summit linking the urban reality with the technological revolution. The 2016 edition (15-17 November) hosted nearly 17 000 visitors, 591 exhibitors, 420 speakers and more than 600 cities. The event attracts the highest level of stakeholders in the context of urban development and innovative technologies. This year´s debate was held around the topics of collaborative economy, energy innovation, sustainable mobility, co-creation dynamics, open data integration, and the need to invest in education, health and support systems for aging populations.

Triangulum was present in a joint EU SCC projects stand at this leading platform of ideas and networking. Our presence was able to attract the attention of hundreds of visitors from industry, research and public institutions interested in the topic of smart cities and new forms of collaboration. 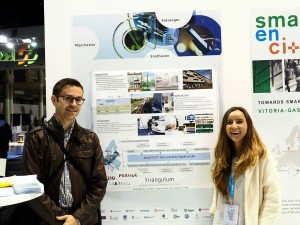 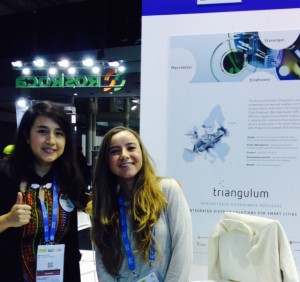 The coordinator team as well as one representative from the city of Sabadell were present at the stand, sharing the experiences from the project and exchanging ideas with the other SCC initiatives and the public. The participating smart districts and the challenges for replication within the project were presented in various speaking sessions held at the stand.

For further information about the SCEWC 16 please visit the event website.

On 18th October 2016, the Triangulum project partners in Manchester welcomed a group of delegates from Berlin Energy Agency. They were attending as part of a Horizon 2020 funded Urban Learning programme.

Having expressed a specific interest in energy management and planning, the group was given an overview of the Energy workstream by Siemens, and of Manchester’s Smart City projects by Manchester City Council. The visitors were then shown around the Energy Centre of the BREAM Excellent Birley Campus at Manchester Metropolitan University, which will be one of the buildings that will receive new technology as a result of Manchester’s Triangulum activities.

Triangulum partners informed about the project at a stand at the smart city conference Nordic Edge in Stavanger this October. Nordic Edge aims at becoming one of Europe’s most important arenas for knowledge exchange and inspiration for creators of smarter businesses, smarter homes and smarter cities and has taken place for the second time in 2016.

The Triangulum stand was well visited, and numerous visitors were interested in learning more about the project. Nordic Edge counted 2,080 participants from all over the world, and had over 100 exhibitors.

Represented by the Stavanger partnership, Triangulum was promoted at the 15th Annual Transatlantic Forum in Chicago from 24th to 25th October 2016. Sciences, innovation and business were included as part of the cross disciplinary programme.

The Triangulum Stavanger partners were invited by the Norwegian Embassy and the Norwegian Research Council to take part in a session on smart cities and triple helix cooperation titled “Smart Cities – Smart Technologies – Ethics”. The session was planned and moderated by David Collins from the Norwegian University of Science and Technology in Trondheim.

The workshop focused on partnerships as a key factor for smart cities. New collaborative arenas and potential projects were discussed. Representatives of Stavanger and Chicago described their smart city activities from the city, industry and knowledge perspective, and highlighted the role of these local partnerships for successful long term collaboration in smart city projects and programmes.

The Triangulum activities in Stavanger were presented and discussed by Gerd Seehuus, the local coordinator of the Lighthouse City Stavanger, Dagfinn Wåge, head of Innovation Department of LYSE AS and Chunming Rong, Professor at the CIPSI Institute of the University of Stavanger.

The purpose of Norway’s Transatlantic Forum (TF) in North America is to promote enhanced cooperation between American, Canadian and Norwegian research, education and innovation. It is a forum where policymakers and knowledge producers meet to forge and develop long-term partnerships and discover cross-disciplinary and groundbreaking new ideas. In 2016, humanities and social sciences and societal challenges were at the core of the programme with its overall theme “Big challenges – human solutions”.

Every 20 years, the United Nations Conference on Housing and Sustainable Urban Development is organised. The latest edition, Habitat III, took place in Quito, Ecuador, from 17-20 October 2016 – and Triangulum coordinator Damian Wagner was there too. He formed part of a delegation from the German city Ludwigsburg, headed by its mayor Werner Spec.

The Habitat III Conference aimed at reinvigorating the global commitment to sustainable urbanisation and to focus on the implementation of a New Urban Agenda. Habitat III offered a unique opportunity to discuss the important challenge of how cities, towns and villages are planned and managed in order to fulfil their role as drivers of sustainable development, and hence shape the implementation of new global development and climate change goals. 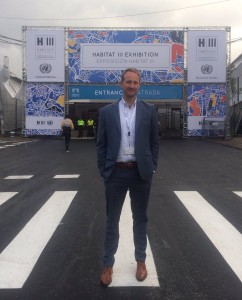 The Triangulum Project was represented at a joint stand together with the other six European Smart City Lighthouse Projects at the SGBC16, celebrated on October 18-19th in Stockholm, Sweden.

The Building Sustainability SGBC16 with WorldGBC Congress Sweden brought together stakeholders working with sustainability in real estate, architecture, construction and urban planning. The 2016 edition of the conference addressed how the built environment can actively contribute to sustainable living and a more stable climate.

The seven European Smart City Lighthouse projects Triangulum, Remourban, GrowSmarter, SmartEnCity, REPLICATE, Smarter Together and Sharing Cities were represented at the conference within a joint stand. They presented their Lighthouse Cities and Follower Cities and the technical solutions being applied. 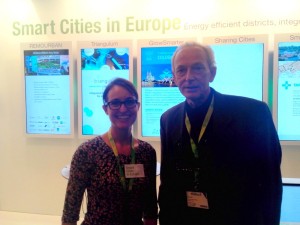 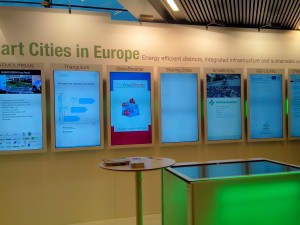 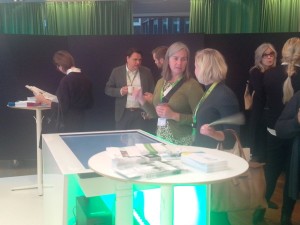 Further information can be found on the SGBC 16 website.