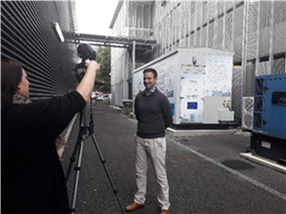 Various of the Triangulum project partners, especially from Manchester, have recently been interviewed by the Manchester Climate Change Agency News Channel. Andrew Smyth (Siemens) and Ettore Murabito (University of Manchester) were the first to talk about the Triangulum energy and ICT work that is taking place in Manchester. During his interview, Andrew mentions that, here in Manchester, “we are currently looking at how we can trial new innovative energy technologies”. For the full video, click here. Ettore speaks about the concept of Smart Cities in general and states that, in his opinion, the term “Smart City” is not a all unambiguous. Curious to find out what he means by this? Check out the entire video.

Snapshots and previews of the interviews have been posted on twitter (and, of course, retweeted by us), with longer versions being uploaded to the MCCA News Channel on YouTube.

Following on from these interviews with Ettore and Andrew, MCCA interviewed Jason Smith (Manchester Metropolitan University/ManMet) about the Triangulum mobility theme and how it has helped grow the e-vehicle fleet at ManMet. Currently, 14 electric vehicles are used on campus, representing 54 % of the entire fleet. The goal though is much higher. Interested in how high exactly? Check out the video here.

Fortunately, this is not even it. Pavol Gajdos (Manchester Bike Hire) is due to be interviewed by MCCA about the Triangulum Cargo Bike Loan Scheme as well. And who knows? Maybe there will be even more videos to follow. Stay tuned – we will keep you informed! And sign up for the MCCA News Channel on YouTube.