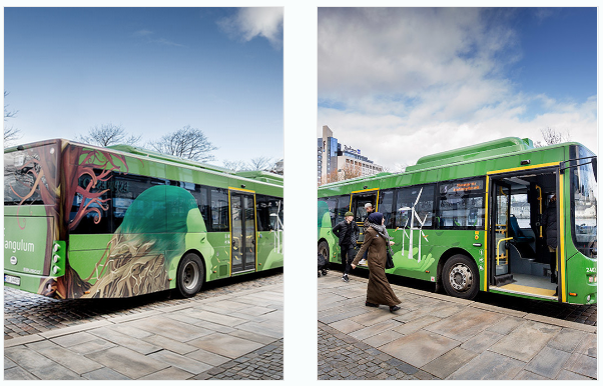 With Stavanger as a Lighthouse City of Triangulum, the Stavanger region has developed new technology and interacted across the private and public sectors to cut CO₂ emissions, to create better transport and communication solutions, and to make energy use more efficient.

With the support of Kolumbus, Rogaland City Council has implemented emission-free electric buses in Stavanger, being the first in Norway. The City of Stavanger helped establish a central energy plant that uses heat from the city’s wastewater to produce energy. The University of Stavanger has developed a data hub that can process, analyze and visualize large amounts of data. Lyse AS has developed new technologies for energy efficiency and management that have been tested in 100 homes, a gym, and a nursing home. They have also developed Blink, a video system providing secure communication on different screens. Greater Stavanger has led the communication work to spread knowledge about these local projects nationally and internationally.

The participation in Triangulum has laid the groundwork for active public and industrial engagement regarding smart cities developments. As a result, Stavanger Smart Region, a network and regular meeting arena for the 13 municipalities in the Greater Stavanger region has been formed. It has also contributed to creating an internationally renowned conference and exhibition, the Nordic Edge, as well as a national cluster, other proposals and project networks.

The University of Stavanger has initiated an international cooperation on smart city technology called CityZEN. Also, the university has become a European University as part of the European Consortium of Innovative Universities (ECIU). The new ECIU University will be based on solving challenges offered by public and private sector actors. This pilot project will concentrate on challenges related to UN Sustainability goal #11 – sustainable cities and communities. The City of Stavanger is a partner and has confirmed that they will provide three challenges for ECIU learners to be solved.

Participation in Triangulum has also led to new EU-projects such as TrAM – an electric boat that is currently being built and will operate between Hommersåk and Stavanger. Being the first in Norway to implement buses running on battery power has led to increased attention on electric buses and emission-free public transport in our region, and a process of electrifying buses in urban areas is initiated. In 2020, 17 new electric buses will become part of the public transport system in Haugesund. In addition, the Kvitsøy ferry that will start in 2020 as well will run on power from a local onshore energy distribution network and a combination of biodiesel, biogas, and hydrogen.

Lyse AS’s solution Blink has been tested in two of Triangulum’s Follower Cities, Sabadell and Prague. “The aim is that, in the future, Blink will be a trusted communications tool for several different users, specifically within health care, but also for a wide range of other purposes,” says Per Fjeld, Senior Advisor at Lyse AS.

As a result of energy management tested in 100 homes, 10-20 of these will continue to use the smart panel and establish a customer-relationship with the Lyse AS brand Smartly.

Elnett 21 is another project that Lyse AS will be part of during the next couple of years. This project aims at creating an energy system of the future, exploiting flexibility between large energy users, which in this case are an airport, a harbor, and an industrial park. Lyse has also been able to contribute actively in another H2020 project called INVADE, developing future solutions for distributed storage and flexibility in the energy market.

The central energy plant will continue to be the primary source of energy for the city’s administrative buildings. To educate the citizens of Stavanger and other professionals interested in the energy plant, the city is creating an information board that illustrates how the central energy plant works. This board will be installed on the outside of the administrative buildings. It will contain a visible sign of Triangulum and the information will also be digitally available.

To further communicate the exciting projects and the results of Triangulum within Stavanger region, a web page has been developed where you can read more about each of the implementations mentioned and their respective outcomes: www.traingulum.no